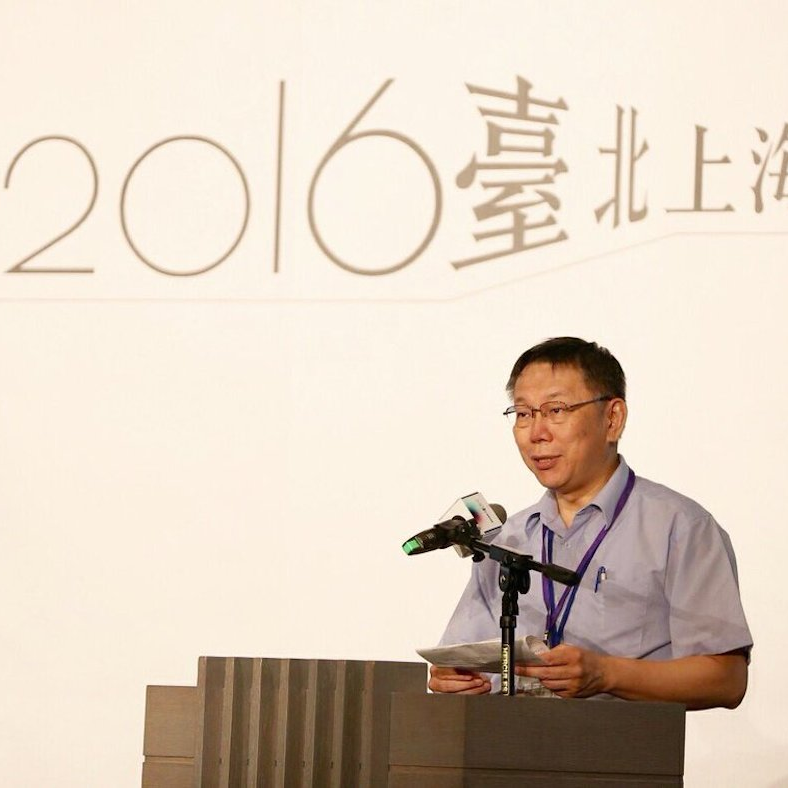 Controversial as of late would be Taipei mayor Ko Wen-Je’s initiative to build stronger ties between Taipei and Shanghai through a recently held Taipei-Shanghai Forum, with concerns that this represents Ko’s selling out Taiwanese interests to Chinese ones. Ko is usually thought of as a more pro-independence or pro-Taiwan figure than not, given that his campaign for Taipei mayorship was largely conducted with the backing of post-Sunflower movement Taiwanese civil society and youth activism.

But Ko’s status as a political independent who did not run as a DPP candidate sometimes leads to questioning of Ko’s political stances, and whether he in fact not as staunchly pro-Taiwan as he may appear on the surface. Ko’s eclecticism in terms of political stances does not always help matters on this front, with Ko sometimes not appearing to cohere to traditional positions of the pan-Green camp despite receiving the endorsement of the pan-Green camp during his mayoral campaign. As a result, Ko was dubbed a candidate “beyond Green and Blue” political divisions in Taiwan.

This has been what has led to suspicion of Ko from the DPP and pan-Green camp for potentially harboring some pan-Blue sympathies. For example, in the run-up to 2016 presidential elections, rumors circulated that Ko was considering running as James Soong of the People First Party’s running mate. Though this seemed unlikely, Soong being a deep Blue political figure, this was a possibility seriously considered by the DPP as a possible threat. Soong actually endorsed Ko for Taipei mayorship in 2014 and the two seem to be strangely close for figures otherwise on the opposite ends of the political spectrum. As Taipei mayor, Ko meets with Soong monthly to discuss political matters and Ko has officially appointed Soong a top policy advisor.

Indeed, attempts to conduct exchanges with Shanghai would fit a larger pattern of actions by Ko as Taipei mayor. Ko has in the past attempted to conduct exchanges and visits with Japanese cities—presumably using his position as Taipei mayor and conducting city-to-city exchanges to circumvent the KMT-controlled foreign affairs establishment, seeing as most of these Japan visits occurred under during the Ma administration. But if trying to build closer ties between Taiwan and Japan to ward off the threat of China seems more easily explicable in regards to advancing a pro-Taiwan agenda, more opaque is Ko conducting exchanges with Chinese cities. Is it that, just as Ko’s past Japan visits seem to be aimed at getting around the Ma administration foreign policy establishment, now Ko is attempting to build ties with China to get around the Tsai administration foreign policy establishment?

Accordingly, views of Ko’s meeting with officials from Shanghai have been divided. Given the importance of Shanghai as a city hosting a large number of Taishang and Ko’s generally being perceived as a pro-Taiwan figure, some have seen Ko as attempting to establish cross-strait relations on his own, more pro-independence grounds. Indeed, Ko’s exchanges with Shanghai did not begin recently but actually began fairly early in his administration when Ma Ying-Jeou was still president, lending credence to that view. At that point in time, there was already some waffling by Ko regarding the issue of "One China", however.

Photo Credit: Ko Wen-Je/Twitter
Consequently, though Ko actually visited Shanghai in 2015, backlash did not ensue against Ko the way it regularly does against KMT officials who visit China to meet with Chinese government officials, probably in light of Ko’s more pro-Taiwan political views. But that there is more backlash against Ko in the present also reflects that Ko’s political honeymoon has long since ended. Fewer individuals are willing to place their faith in Ko’s words in the present seeing as Ko has already went back on a number of campaign promises, and this may extend to the politics of independence/unification.

Likewise, if Ko was seen as a more pro-Taiwan or pro-independence figure during elections, during his time as Taipei mayor, Ko has also expressed views that leave many of those who supported him on pro-Taiwan grounds scratching their heads. Ko has in the past praised the administration of Chiang Ching-Kuo, for example, as a time of organized social order and economic prosperity—never mind that Chiang Ching-Kuo was an authoritarian dictator and the cult worship of Chiang Ching-Kuo is more characteristic of deep Blue political actors as James Soong and others.

Thus, criticism of Ko in recent days comes largely from pro-independence groups such as the Taiwan Solidarity Union, which has a history of protesting Chinese officials that visit Taiwan. The Taiwan Solidarity Union on August 24th attempted to disrupt a meeting between Ko and Shanghai Municipal Committee United Front Work Department Director Sha Hailin. Criticisms of Ko are not necessarily that Ko has suddenly done an about-face and decided to sell out Taiwan necessarily, but that Ko has knowingly or unknowingly allowed himself to be used by China.

Sha Hailin, for example, is a lower ranking official than Ko in terms of equivalent positions in the Shanghai municipal government, and some had criticized that it would be degrading to Ko and to Taiwan for Ko to meet with Sha as an equal. Moreover, there is the concern that Ko’s meeting with Sha presents and opportunity for China to try and co-opt Ko. This seems to have been proven true to some extent, Sha seizing the opportunity of meeting with Ko to claim that the exchanges between Shanghai and Taipei were conducted under premises of Ko’s acknowledgement of the “one China” principle and the 1992 Consensus.

Probably Ko will have no shortage of backing up to do on this claim by Sha in the near future, seeing as this will provoke backlash. In particular, Ko faces the challenge of how to connect his efforts at establishing ties between Taiwan and China through Taipei-Shanghai exchanges to a pro-Taiwan agenda in order to avoid alienating his support base, without making any statement which would lead to China suspending exchanges against him with accusations of Ko fomenting Taiwanese independence sentiment.

It seems quite likely that it is to avoid the possibility of China deciding that Ko remains too firmly pro-independence or pro-Taiwan a figure and consequently suspending exchanges that Ko’s general explanations on his purposes for conducting Taipei-Shanghai exchanges have to date been opaque. But, regardless of Ko’s motives, this may quite likely become another blow against the Taipei mayor’s declining popularity.