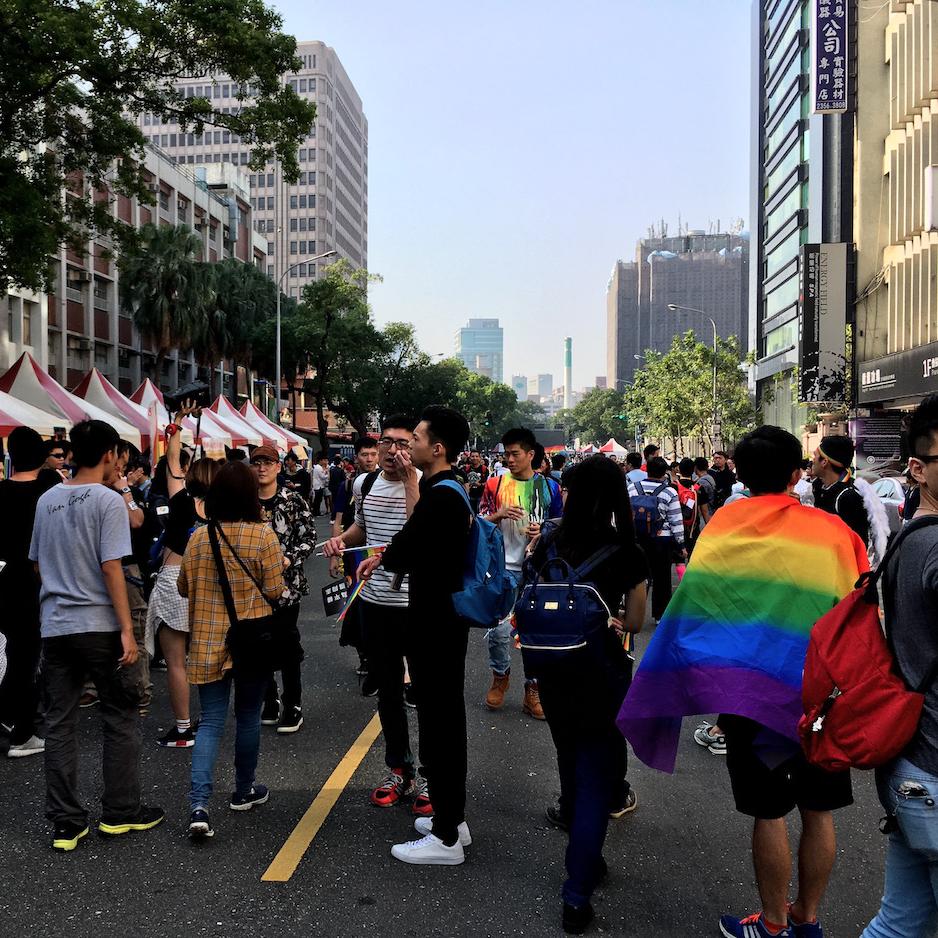 Tens Of Thousands Demonstrate For And Against Marriage Equality

With a bill in favor of amending the Civil Code sent back to the Legislative Yuan as the end result of the committee meeting, rather than a bill that would have added a separate clause to the Civil Code, today’s events have tentatively been viewed as a success by advocates of marriage equality in Taiwan. A bill that added a separate clause to the Civil Code rather than changing the constitution itself largely has been seen as enacting “separate but not” equal civil partnerships, rather than “marriage equality” that would grant same-sex marriage the same legal status as heterosexual marriage.

Photo Credit: Brian Hioe
And so, arguably, forms of direct action should not be ruled off the table in this case by LGBTQ groups. Furthermore, LGBTQ groups should not hesitate to counter-protest anti-marriage equality demonstrations in larger numbers. Most likely, violence would in fact lead to negative press and should be avoided, but anti-marriage equality groups have visibly attempted to co-opt Sunflower movement youth activist tactics such as attempted government building occupations or calling for public referendum, in hopes that using such tactics will grant them similar public attention as with the Sunflower movement. Particularly seeing as Taiwanese youth activism is mostly in support of marriage equality, Sunflower movement tactics involving direct action could perhaps be used in this case as well.

This situation is likely because the legalization of marriage equality was seen as all-but-given in previous months, until protests by anti-marriage equality groups demonstrated a stronger resistance to gay marriage in Taiwanese than was previously anticipated. With marriage equality seeming to be politically safe enough a topic that Tsai Ing-Wen would make it part of her campaign platform and that even fast food chain McDonald’s would feature the issue of coming out in a commercial directed at its Taiwanese market, it was thought that Taiwanese society was generally accepting of same-sex marriage.

While public opinion polling consistently continues to demonstrate that the majority of Taiwanese society does in fact support same-sex marriage, as also indicated by large turnout by pro-marriage equality demonstrators, perhaps too many expected that legalizing marriage equality would be smooth sailing. Majority support of accepting same-sex marriage does not necessarily mean that the majority of society is willing to actively fight for legalizing same-sex marriage. And sometimes it is that politicians prove more recalcitrant on social issues the the members of the public which elected them to office. That the voices of anti-marriage equality demonstrators are heard disproportionate to their actual numbers allows recalcitrant politicians to back down from campaign promises that they only made reluctantly, with the claim that they are only going along with public opinion as politicians should.

Indeed, apart from that the KMT remains staunchly opposed to marriage equality, with only legislator Jason Hsu of the KMT standing in support of marriage equality, elements of the DPP are heavily Christian in nature, and so remain opposed to gay marriage. Division within the DPP about same-sex marriage, in spite of Tsai’s campaign promise to legalize same-sex marriage, may also tie into inter-party conflict between Tsai and party heavyweights such as Ker Chien-Ming, the majority speaker of the Legislative Yuan, who was instrumental in leading the reversal of course of DPP legislators away from marriage equality and towards civil partnership legislation. Of the political parties within the Legislative Yuan, only the NPP has been consistent in its support for marriage equality throughout.

In the case of Ker and others, DPP legislators opposed to marriage equality have attempted to pass off civil partnerships as gay marriage, with their eyes set on Taiwan being able to achieve the claim of being the first country in Asia to legalize gay marriage, something which would raise Taiwan’s international profile and distinguish Taiwan from China. But such legislators do not actually wish for the legalization of same-sex marriage. The Protect The Family Alliance, which is largely Christian-led and has been instrumental in organizing anti-marriage demonstrations, has indicated in the past that it would be less opposed to civil partnerships. This is in the belief that marriage equality would change the definition of the family and that this would be disruptive to society, with the claim that the heterosexual family is the fundamental building block of society. While marriage equality may actually present an opportunity for Tsai Ing-Wen to pull the DPP in line and reassert her authority over the party by putting down defiant party heavyweights as Ker and others by appealing directly to the public, Tsai has been quiet on the issue.

Moreover, it remains wholly possible that the marriage equality bill sent back to the Legislative Yuan may still be gutted by members of the KMT and DPP opposed to gay marriage through caucus consultations, as the KMT has promised they will do. Although the DPP-controlled Ministry of Justice no longer is set to challenge the marriage equality bill with its own civil partnership bill, further tarrying may be possible if Ker Chien-Ming, in collaboration with KMT minority leader Sufin Siluko, is able to delay on discussing the bill and prevent it from reaching a second hearing. If so, today’s victory may be rendered null.

Where marriage equality is concerned, with five days left in the year, it appears that 2016’s struggles are over. But what remains is for advocates of marriage equality to remain on their guard and continue to fight on in the next year. The road remains long and one should not be lured into a false sense of security by the perception that today’s victory represents some kind of climactic victory for marriage equality, seeing as no actions for next year have been announced yet.

Many sought to build numbers in the lead-up to demonstrations today by stressing that now was a crucial period for efforts to realize marriage equality. Some herald today as marking the closest that same-sex marriage has come to legalization in Taiwanese history. But today is far from the final victory of marriage equality in Taiwan, and it is possible that some will mistake today for the end of the struggle. The struggle must continue into 2017.