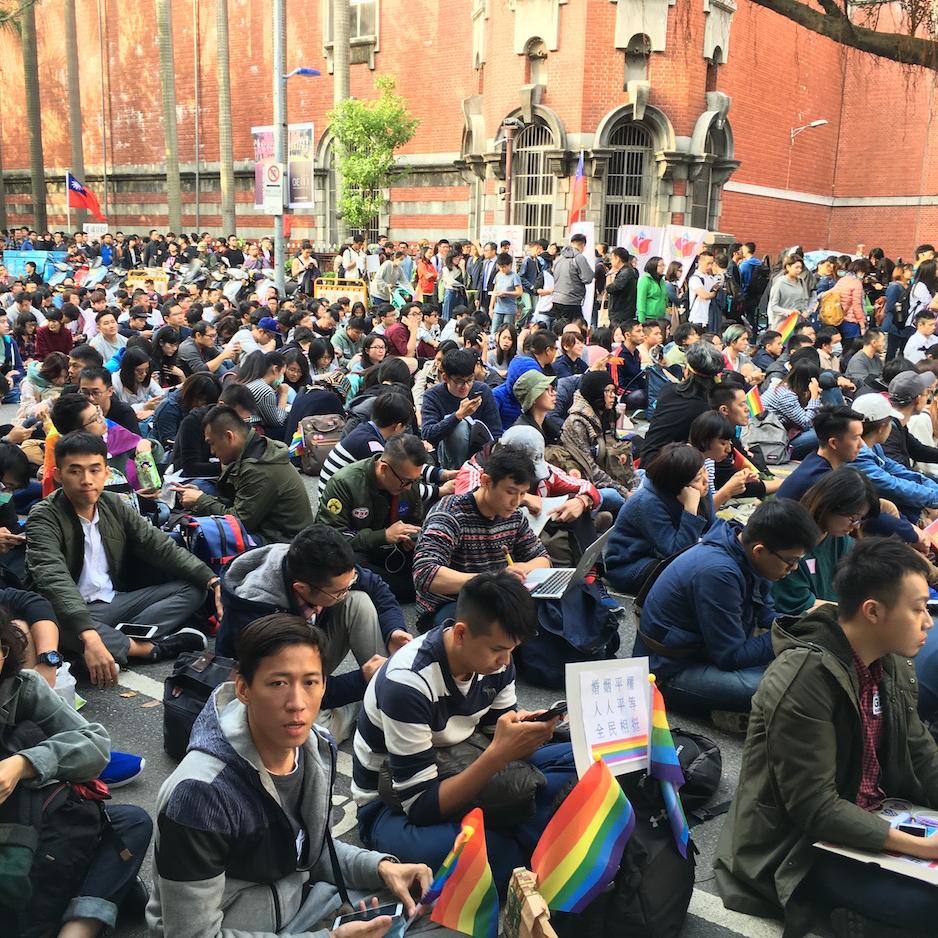 20,000 Demonstrate In Support Of Marriage Equality

20,000 demonstrated in support of marriage equality in front of the Legislative Yuan today, protests coinciding with the second of two public hearings held by the Legislative Yuan on marriage equality. Demonstrators in early morning, before the hearing began at 9 AM, and numbered 5,000 by 10 AM. By mid-afternoon, the number of demonstrators surpassed 20,000.

Participants gathered on Qingdao East Road and included Third Force parties as the Social Democratic Party, Free Taiwan Party, and New Power Party, as well as the Green Party and Tree Party. The demonstration was MCed in large part by Jennifer Lu of the Social Democratic Party, known for her history of LGBTQ activism as a core member of the Tongzhi Hotline, the first formally registered LGBTQ organization in Taiwan, and one of the two openly gay candidates of the Social Democratic Party during 2016 elections. Lu’s criticisms of recent actions of the DPP backsliding from its commitment to marriage equality have been widely shared on social media in recent days among Taiwanese activists.

The large scale anti-marriage equality protest which took place on November 17th, coinciding with the first reading of marriage equality bills in the Legislative Yuan, led to physical clashes within the Legislative Yuan between the DPP and KMT. It was eventually agreed between the two parties that two public hearings would be held on the issue, though the KMT originally called for thirty public hearings before this was talked down to two hearings.

A Surprise Reversal By The DPP?

The vocal demonstration of the Protect The Family Alliance gave justification for recalcitrant elements of the DPP to suggest that the party might reverse course on marriage equality. Following the first public hearing on marriage equality, DPP majority leader Ker Chien-Ming would state that the DPP had decided to generally move in favor of adding an amendment to the Civil Code rather than change the existing, gendered language of the Civil Code which refers to the “husbands and wives” in its definition of marriage.

Changing the Civil Code would be the more legally complicated act, rather than adding an amendment to the Civil Code, but be more wide-sweeping in nature and offer greater protections to LGBTQ couples. Backing away from changing the definition of marriage would be an act aimed at placating anti-marriage equality demonstrators, however. Anti-marriage equality demonstrators has claimed that heterosexual marriage is the fundamental basis of society and changing the definition of marriage would dissolve the very foundations of society, leading to absurdities as people marrying trees, cars, and inanimate objects.

Photo Credit: Brian Hioe
Though Ker claimed that the advantages and disadvantages of adding an amendment to the Civil Code versus changing the Civil Code still needed to be investigated, while also suggesting that the DPP would move in the direction of adding an amendment to the Civil Code, Ker’s comments provoked further outrage in also stating that new legislation might be needed to legalize gay marriage. Rather than the Legislative Yuan seeking to consolidate the three different versions of the marriage equality bill, between the DPP, KMT, and NPP versions, to begin with, this would lead to further dragging on the matter of gay marriage within Legislature.

But Ker also suggested through his statement that this means that the DPP plans to abandon its current marriage equality bill altogether. Ker claimed that, in particular, there needs to be more investigation into the effects of changing the gendered language of Article 972 of the Civil Code which defines marriage as between “husband and wife”. The existing DPP bill already changes the gendered language of Article 972 and so Ker seems to be suggesting that the DPP will move in the direction of “separate but equal” civil partnerships instead of marriage equality altogether. Though granting further legal rights to gay couples, civil partnerships would still deny gay couples the status of marriage and would not grant them the same rights as married heterosexual couples.

Ker claimed that regardless of the outcome, Taiwan will still be the first country in Asia to legalize gay equality. Likely Ker has his eye on the soft power of international recognition of Taiwan as the first country in Asia to realize gay marriage, given Taiwan’s general lack of recognition in the world, and since this would be another way for Taiwan to differentiate itself from China. Indeed, DPP legislator Hsiao Bhi-kim, who visited today’s demonstration to give a speech, recently was quoted in an editorial in the New York Times suggesting that Taiwan would be the first country in Asia to legalize gay marriage. But, on the other hand, Ker would be trying to disguise civil partnerships as marriage equality. Members of anti-marriage equality groups have sometimes indicated that they would be fine with civil partnerships, so long as same-sex marriages are not legalized or the definition of marriage is not changed.

Though seemingly a reversal for the DPP, Ker’s comments do not come out of a vacuum. Internally, the DPP is likely split on the issue of gay marriage, but current president Tsai Ing-Wen made it a campaign promise that she would legalize marriage equality. The DPP has historically had strong ties to the Presbyterian Church, which is in itself divided on the issue of gay marriage. This is probably why Tsai has flopped on marriage equality several times already, seeing as though Tsai promised during 2016 presidential campaigning that she would legalize marriage equality, after Tsai took office, the DPP came out in favor of civil partnerships versus marriage equality.

Ker, however, is probably not so keen on marriage equality. Though Ker claims to speak in the name of the DPP, this may represent tension between himself and Tsai, as well as tensions between himself and DPP party heavyweight Yu Mei-nu, who fronted the DPP’s version of the marriage equality bill. We can see signs of other rifts within the DPP in the Ministry of Justice’s challenge to Yu Mei-nu’s bill under DPP Minister of Justice Chiu Tai-San and the Ministry of Justice’s plan to go through with a bill for civil partnerships, which will not be ready until February. Ker, who has headed the DPP caucus in legislator for some time as its minority whip then majority speaker, has long been seen as someone who would challenge Tsai’s power within the DPP.

As can observed from today’s demonstrations, outraged has followed from Ker’s reversal of positions. A petition to recall Ker has reached over 8,000 signatures. Still, while many have pointed fingers at Ker as the culprit to blame for the DPP’s backsliding on gay marriage, given such factional conflict within the DPP, Tsai is ostensibly the leader of the DPP as chairperson of the DPP. Again. As such, Tsai having backed down from marriage equality in the past is a sign of cold feet on her part and this could actually be an issue with which she used to further consolidate her power within the DPP. Despite his longstanding influence within legislature, Ker’s position is already tenuous within the DPP and has become further tenuous since the Tsai administration took office.

Again, marriage equality is something which has the majority support of the Taiwanese population, as indicated by polling. This is also indicated by the 2016 pride parade dwarfing anti-marriage equality demonstrations, with 80,000 participants and that today’s demonstrations drew comparable turnout to the November 17th anti-marriage equality demonstration despite the short notice. Rather than flopping back and forth on the issue, if Tsai had taken a stronger stand on the matter as a politician who would not have compromised on marriage equality, no matter what, likely Tsai would have boosted her support from members of the public in favor of marriage equality and used public sentiment as a means to force members of the DPP as Ker to fall in line. Much of this returns to a failure of nerve on the part of the Tsai administration, as observed with the Tsai administration’s constant shifts in position on many social issues.

Notably, the first of the two public hearings on marriage equality did not see a great number of pro-marriage equality demonstrators, although several hundred gathered outside of the Legislative Yuan nonetheless. Although many were shocked by the anti-marriage equality rally on November 17th, perhaps it was expected that the DPP would shrug off the protests of a vocal minority of Taiwanese society.

As such, the significant numbers of today’s demonstration can be seen as in large part a reaction to the backsliding of the DPP, specifically in regard Ker’s comments. While recalcitrant members of the DPP such as Ker may be hoping that members of the public do not finesse distinctions between marriage equality and civil partnerships by trying to pass off civil partnerships as marriage equality, this is evidently not the case. Compounding the hypocrisy of the DPP to date and adding to the confusion about its stances, after it was clear that 20,000 had assembled in support of marriage equality by mid-afternoon, the DPP would release a brief but vague statement claiming that the party remained unchanged in its commitment to marriage equality.

But it should not be surprising that some remain opposed to gay marriage. Even should marriage equality pass into law, much work remains to be done to combat discriminatory social attitudes and stereotypes of LGBTQ individuals. T begin with, when has any any group of disenfranchised people won their rights through simply asking politicians politely? Rather, rights are won through fighting for them. Where the shifting public positions of politicians is concerned, one should not be afraid to stand against public sentiment for what is right either. And although marriage equality is supported by a majority of Taiwanese society, sometimes one needs to be willing to go against the flow in order to change public opinion.

And that is what needs to be remembered going forward. Further demonstrations are set to take place on December 10th at Ketagalan Boulevard, to coincide with World Human Rights Day.