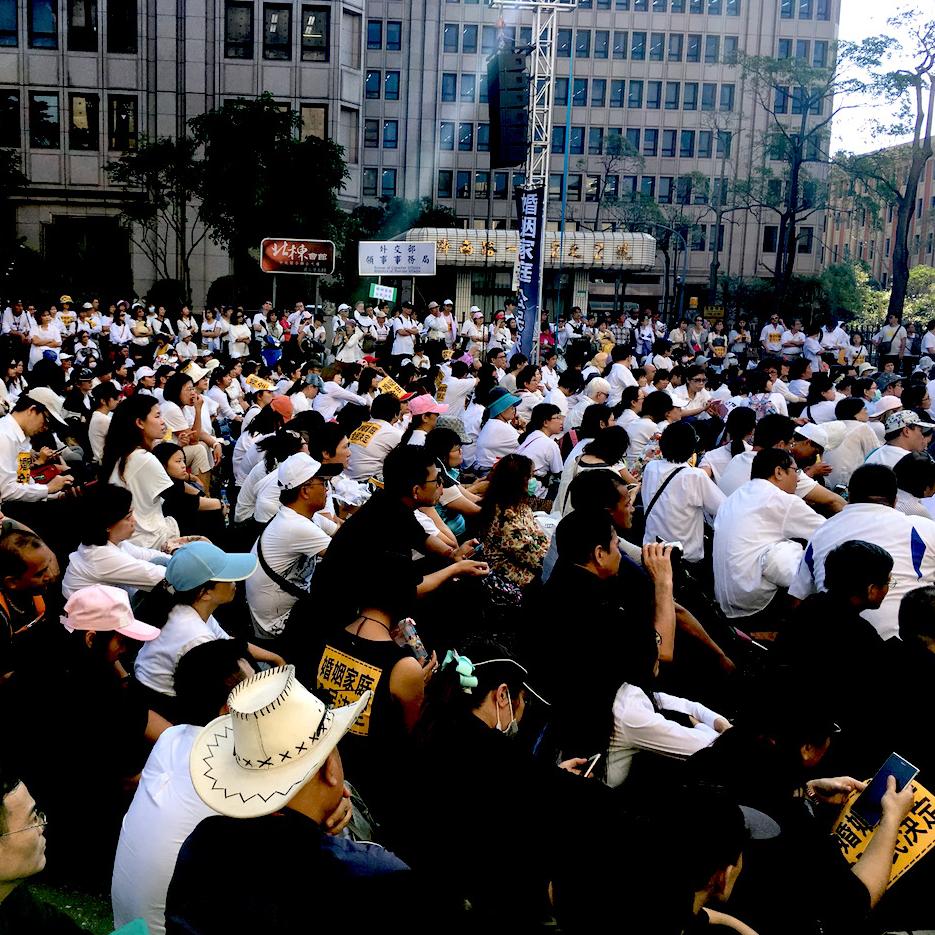 Anti-marriage equality demonstrators gathered in the early morning hours, only beginning to disperse around nightfall, and carried placards stating that marriage must be decided by the people and protesting against what they called “Black Box” attempts to push marriage equality through Legislature. An attempt to storm the Legislative Yuan by several individuals also took place. Perhaps this reflects to what extent the Sunflower Movement has shaped the language of protest in Taiwan in the past several years, with demonstrators regarding various social issues attempting to imitate the actions of the movement in the hope that this will electrify society in the same way as the Sunflower Movement. The KMT has attempted similarly in the past regarding the issue of American pork imports.

Anti-marriage equality demonstrators used the language of democracy to phrase their demands, but opposition to gay marriage on the part of demonstrators seems to largely religious in nature. Nonetheless, claims were made that the process for legalizing marriage equality must fair and transparent, or that the possible negative social consequences of marriage equality must be more carefully examined. More directly homophobic sentiments probably revealing of the true sentiments of these groups leaked out more and more as the demonstration went on, with warnings that the legalization of gay marriage would lead to Taiwan becoming an “island of AIDS”, somehow harm the children of heterosexual couples by steering them towards sexual perversion, or otherwise offend God.

The number of pro-marriage equality demonstrators grew as night approached, presumably because work had ended for many, growing to several hundred. The pro-marriage equality Christian group held a candlelight vigil during this time. Third Force parties such as the New Power Party and Free Taiwan Party made appearances carrying rainbow banners, with Freddy Lim and Kawlo Iyun of the New Power Party giving speeches, and the Free Taiwan Party bringing large rainbow banners to the demonstration site. Anti-marriage equality groups later would lash out at Lim for his speech, continuing claims circulated during 2016 election season by Lim’s political opponents that Lim was a sexual deviant for having long hair.

On the other hand, the numbers of the anti-marriage equality rally thinned as time went on, declining to several thousand by 6 PM. The rally dispersed after a prayer around 7 PM. Seeing as the rally it was counter-protesting had ended, the pro-marriage equality demonstration also dispersed around that time.

Photo Credit: Brian Hioe
The anti-marriage equality rally was planned to coincide with the second reading of the marriage equality bill in the Legislative Yuan. As with many other contested reform measures pushed for by the Tsai administration, including regarding planned labor reforms, various versions of the bill circulate, as contested between different political parties and individual legislators.

The KMT also demanded a review of the bill and as a compromise measure, and it was finally agreed that two public hearings will be held, one organized by the DPP and the other by the KMT. This may be as a way to solve the differences between the bills, but holding public hearings is also seen as a way to vent public anger from anti-marriage equality demonstrators. The KMT originally called for thirty hearings to be held, before this was negotiated down to two hearings.

Strong criticism of the DPP for giving way and allowing for the further stalling of marriage equality in Taiwan has followed. Notably, the DPP originally was not in favor of marriage equality, but only civil partnerships, despite campaign promises by Tsai Ing-Wen to realize marriage equality. The DPP later reversed course on the matter after criticism by LGBTQ groups. Some elements of the DPP remain strongly opposed to gay marriage, particularly those with ties to the anti-gay elements of the Presbyterian Church, which has historically had a large amount of influence over the DPP. The DPP flag notably contains a cross because of the influence of the Presbyterian Church. Likewise, the KMT is divided on the issue. The KMT historically has been the less LGBTQ-friendly party, also having strong ties to anti-gay marriage church groups, although younger legislators such as Chiang Wan-An or Jason Hsu are in support of marriage equality. Members of the KMT were present at today’s anti-marriage equality rally.

Thus, the future of marriage equality in Taiwan remains to be seen. Although anti-marriage equality demonstrators demonstrated in force today, it is to be remembered that the demonstration today was a mere fraction of the pride parade which took place in late October, which brought over 80,000 onto the streets of Taipei.