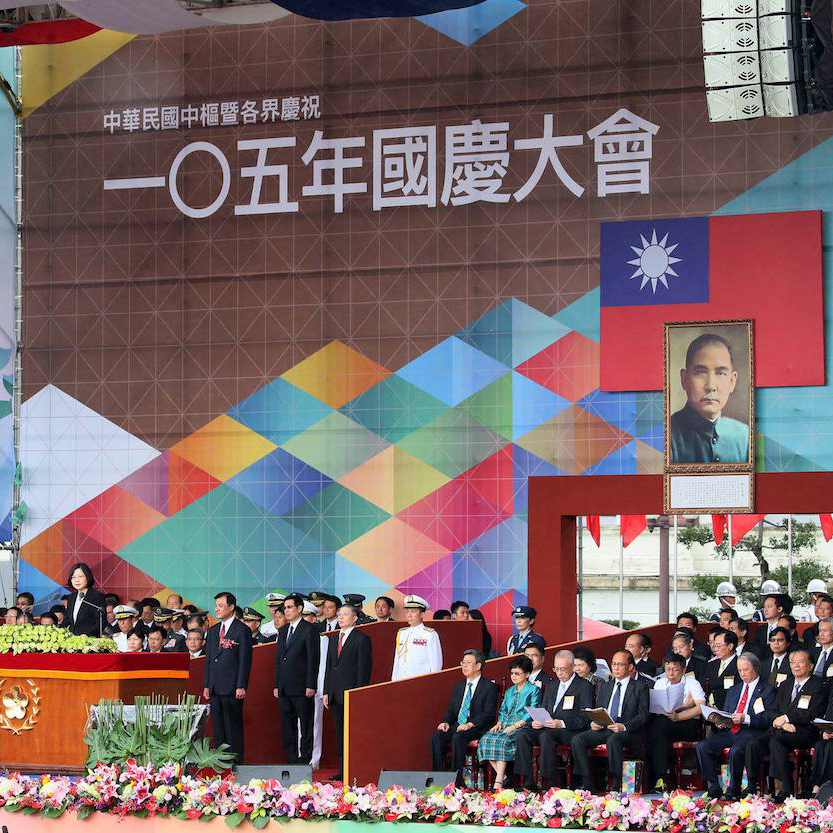 National Day celebrations for the 105th anniversary of the Wuchang Uprising celebrated as the birthday of the Republic of China (ROC) took place today, with ceremonies, speeches, and performances taking place on Ketagalan Boulevard in front of the Presidential Residence. This is the first National Day to take place under the Tsai administration. In attendance were former president Ma Ying-Jeou, former vice president Wu Den-yih, Taipei mayor Ko Wen-Je, and James Soong of the People First Party. Four delegations from European countries including the UK, Germany, Portugal, Brazil were also present, as was St. Vincent and the Grenadines prime minister Ralph Gonsalves.

After some speculation as to whether he would be allowed to attend, former president Chen Shui-Bian did not attend the event despite being an issued an invite. This was a result of that Taichung Prison refused to allow him to attend. Taichung Prison justified Chen’s exclusion on medical grounds concerning Chen’s precarious state of health after his release from prison on medical parole. That Chen was invited then later not allowed to attend the ceremonies has been criticized by Ko Wen-Je. Another notable absence was KMT chairperson Hung Hsiu-Chu, who did not attend the event as a gesture of protest against the DPP.

While there was some speculation ahead of time as to whether Tsai Ing-Wen would have anything new to say about acknowledgement or non-acknowledgement of the 1992 Consensus, Tsai Ing-Wen did not express very much which she had not already stated in the past in her National Day speech.

On economic policy, Tsai emphasized the need for housing reform, given that young people cannot afford housing, that it was necessary to reform the pension system because the pension system may soon go bankrupt, and to boost technological innovation for the sake of sustainable economic growth. Though not touching on judicial reform or settling KMT party assets directly, Tsai also reiterated the need to settle issues of transitional justice in order to find justice for the past crimes of the authoritarian period.

On international policy, Tsai stated that Taiwan will continue to pursue diplomatic ties with democratic nations and participation in international bodies and NGOs, continued commitment to the New Southwards Policy to build stronger ties between Taiwan and Southeast Asian countries. Concerning cross-strait relations, as with her inauguration speech, Tsai again did not directly acknowledge the 1992 Consensus, stating instead that her administration “respect[ed] the historical fact that in 1992, the two institutions representing each side across the strait (SEF and ARATS) met”. Tsai also reiterated a commitment to “maintaining the status quo”, stating that her vow to voters to do this had not changed since her inaugural address, and calling on China to restore communications with Taiwan, seeing as Taiwan’s cross-strait policy has been consistent and Tsai has no intervention of “revert[ing] to the old path of confrontation”—probably an indirect reference to the Chen administration’s more confrontational stance towards China.

If none of this is anything particularly new, Tsai seems to have taken her National Day address to reiterate that she does not plan on changing course anytime soon, even if her popularity has suffered in recent months due to the public perceiving Tsai as being too slow moving or even retrenching on campaign promises. Along such lines, with calls by Tsai to reshuffle her cabinet and replace Premier Lin Chuan, Tsai emphasized her support for the efforts of Lin and the rest her cabinet, indicating that she does not plan on replacing cabinet members this anytime soon.

As with Tsai's inauguration, Tsai’s National Day speech was preceded and followed by performances. Traditional National Day celebrations focus in particular on the ROC military, the military having a place of privilege in ROC nationalism, and inflecting the past authoritarianism of the ROC government. Much as Tsai’s inauguration ceremonies attempted to revise the traditional ROC inaugural ceremonies, this was also true of Tsai’s National Day ceremony. With the theme of “local heroes,” the military was featured alongside rescue workers, firemen, and disaster aid workers in order to place less ideological weight on the military, and to arrogate the military into one of many “local heroes” of Taiwan.

Efforts were made to focus on Taiwan as a society which is not just Han in nature, but also composed of indigenous, Hakka, and recent immigrants. This was reflected not only in the performances, but in that many of the speeches at the ceremony featured greetings in Mandarin, Taiwanese, Hakka, and indigenous languages. This continues the attempt which we saw Tsai’s inauguration ceremonies to decouple Taiwan from China-centrism through this focus on Taiwan as a pluralistic society.

The idea would be to present Taiwan as a lively, pluralistic, and youthful society through the diversity of the different peoples who are a part of Taiwan. However, as with Tsai’s provoking ire from indigenous groups in her inauguration ceremony through the MC’s reference to indigenous as having “primitive and uncultivated customs” which needed to be tamed by western colonialism, the MC of Tsai’s National Day ceremony would cause offense among indigenous groups through the suggestion that people can remember the name of Taiwan’s many indigenous communities through the mnemonic “邵太太打卡，阿薩不魯哥，被嚇得跑走啦” (Literally, “Mrs. Shao clocks out in disarray and runs away in fright”).

Apart from the suggestion that the names of Taiwan’s indigenous communities are so hard to remember that they require a mnemonic was seen as offensive, the use of the term “阿薩不魯哥” in particular caused anger. “阿薩不魯哥” is Internet slang meaning “in disarray,” “chaotic”, or “messy.” Despite attempts to depict Taiwanese society as already being diverse, open, and pluralistic, continued missteps by the Tsai administration regarding respect for Taiwanese indigenous perhaps reflect the long path which needs to be walked for genuine ethnic and cultural pluralism to be realized in Taiwan.

Yet returning to the nature of National Day as celebrating the Republic of China and not Taiwan—an important distinction to be made—National Day is not actually a celebration of Taiwan, but of a government which existed in China close to seventy years ago. It is to be questioned whether the KMT government-in-exile which fled to Taiwan after its defeat in the Chinese Civil War and subsequently ruled over Taiwan in authoritarian fashion for decades afterwards has any real connection to the original ROC that was founded in China 105 years ago by Sun Yat-Sen.

Arguably, that original ROC ceased to exist in 1949 and the ROC in Taiwan which was ruled over by Chiang Kai-Shek was merely the phantom of that previous ROC, which then came to haunt Taiwan. Thus, National Day perhaps celebrates a political entity which ceased to exist close to seventy years ago. This is a way in which the ROC framework continues to yoke Taiwan to a long expired version of China that is only kept alive in the delusions of the KMT.

As such, on Ketagalan Boulevard just outside the grounds of official National Day ceremonies, young Taiwanese independence activists held a series of performances today to show that they do not consider the ROC and Taiwan to be synonymous entities. This demonstration was entitled “This Isn’t the Kind of National Day I Want”, suggesting that the “nation” young Taiwanese independence activists identify with is not the ROC. The event was primarily organized by the group Singing Revolution, with the participation of the Free Taiwan Party, Alliance of Referendum for Taiwan, Taiwan Independence Reformation Association, and other groups. The composition of the event was quite young, consisting primarily of youth activists. Youth activists also stressed that they view Taiwan as a multicultural and pluralistic society, but that indigenous, waishengren, and benshengren alike continue to be yoked to the fetters of the ROC framework.

But it remains that the ROC framework remains and the present government administration fears breaking away from it would be too disruptive of cross-strait relations. A National Day which celebrates Taiwan, not the ghost of the ROC, may still be a long way away.